I was talking with a Percona Support customer earlier this week who was looking for Galera data on Percona Cloud Tools. (Percona Cloud Tools is a hosted service providing access to query performance insights for all MySQL uses.)

The customer mentioned they were already keeping track of some Galera stats on Cacti, and given they were inclined to use Percona Cloud Tools more and more, they wanted to know if it was already supporting Percona XtraDB Cluster. My answer was: “No, not yet: you can install agents in each node (the regular way in the first node, then manually on the other nodes… and when prompted say “No” to create MySQL user and provide the one you’re using already) and monitor them as autonomous MySQL servers – but the concept of cluster and specially the “Galera bits” has yet to be implemented there.”

Except I was wrong.

By “concept of cluster” I mean supporting the notion of group instances, which should allow a single cluster-wide view for metrics and query reports, such as the slow queries (which are recorded locally on the node where the query was run and thus observed in a detached way). This still needs to be implemented indeed, but it’s on the roadmap.

The “Galera bits” I mentioned above are the various “wsrep_” status variables. In fact, those refer to the Write Set REPlication patches (based in the wsrep API), a set of hooks applied to the InnoDB/XtraDB storage engine and other components of MySQL that modifies the way replication works (to put it in a very simplified way), which in turn are used by the Galera library to provide a “generic Synchronous Multi-Master replication plugin for transactional applications.” A patched version of Percona Server together with the Galera libray compose the base of Percona XtraDB Cluster.

As I found out only now, Percona Cloud Tools does collect data from the various wsrep_ variables and it is available for use – it’s just not shown by default. A user only needs to add a dashboard/chart manually on PCT to see these metrics: 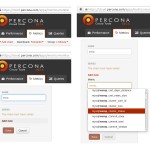 Now, I need to call that customer …

Since I’m touching this topic I thought it would be useful to include some additional information on monitoring a Galera (Percona XtraDB Cluster in particular) cluster, even though most of what I mention below has already been published in different posts here on the MySQL Performance Blog. There’s a succint documentation page bearing the same title of this section that indicates the main wsrep_ variables you should monitor to check the health status of the cluster and how well it’s coping with load along the time (performance). Remember you can get a grasp of the full set of variables at any time by issuing the following command from one (or each one) of the nodes:

And for a broader and real time view of the wsrep_ status variables you can use Jay Janssen’s myq_gadgets toolkit, which he modified a couple of years ago to account for Galera.

There’s also a specific Galera-template available in our Percona Monitoring Plugins (PMP) package that you can use in your Cacti server. That would cover the “how well the cluster copes with load along the time,” providing historical graphing. And while there isn’t a Galera specific plugin for Nagios in PMP, Jay explains in another post how you can customize pmp-check-mysql-status to “check any status variable you like,” describing his approach to keep a cluster’s “health status” in check by setting alerts on specific stats, on a per node basis.

VividCortex recently added a set of templates for Galera in their product and you can also rely on Severalnines’ ClusterControl monitoring features to get that “global view” of your cluster that Percona Cloud Tools doesn’t yet provide. Even though ClusterControl is a complete solution for cluster deployment and management, focusing on the automation of the whole process, the monitoring part alone is particularly interesting as it encompasses cluster-wide information in a customized way, including the “Galera bits”. You may want to give it a try as the monitoring features are available in the Community version of the product (and if you’re a Percona customer with a Support contract covering Percona XtraDB Cluster, then you’re entitled to get support for it from us).

One thing I should note that differentiate the monitoring solutions from above is that while you can install Cacti, Nagios and ClusterControl as servers in your own infrastructure both Percona Cloud Tools and VividCortex are hosted, cloud-based services. Having said that, neither one nor the other upload sensitive data to the cloud and both provide options for query obfuscation.

Contrary to what I believed, Percona Cloud Tools does provide support for “Galera bits” (the wsrep_ status variables), even though it has yet to implement support for the notion of group instances, which will allow for cluster-wide view for metrics and query reports. You can also rely on the Galera template for Cacti provided by Percona Monitoring Plugins for historical graphing and some clever use of Nagios’ pmp-check-mysql-status for customized cluster alerts. VividCortex and ClusterControl also provide monitoring for Galera.

Percona Cloud Tools, now in free beta, is a hosted service providing access to query performance insights for all MySQL uses. After a brief setup, unlock new information about your database and how to improve your applications.