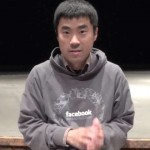 I spoke with Facebook database engineer Yoshinori Matsunobu here at Percona Live 2014 today about a range of topics, including MySQL at Facebook, the company’s recent move to WebScaleSQL, new MySQL flash storage technologies – and why attending the Percona Live MySQL Conference and Expo each year is very important to him.

Facebook engineers are hosting several sessions at this year’s conference and all have been standing room only. That’s not too surprising considering that Facebook, the undisputed king of online social networks, has 1.23 billion monthly active users collectively contributing to an ocean of data-intensive tasks – making the company one of the world’s top MySQL users. And they are sharing what they’ve learned in doing so this week.

You can read my previous post where I interviewed five Facebook MySQL experts (Steaphan Greene, Evan Elias, Shlomo Priymak, Yoshinori Matsunobu and Mark Callaghan) and below is my short video interview with Yoshi, who will lead his third and final session of the conference today at 12:50 p.m. Pacific time titled, “Global Transaction ID at Facebook.”