The Percona Live MySQL Conference 2014 in Santa Clara, California is just around the corner: April 1-4. There is a tremendous amount of activity leading up to the conference, some of which I will highlight here. 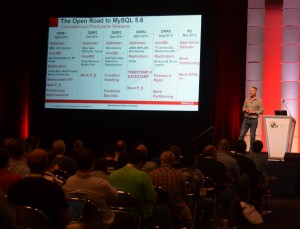 I am extremely pleased with the keynote speakers we can now announce. They include speakers from major MySQL users Dropbox and Big Fish Games as well as speakers from influential technology leaders Oracle, Fusion-io, Continuent, and Percona. We are fortunate to once again have Tomas Ulin join us to talk about the future of MySQL including insight into the coming improvements in MySQL 5.7. The list of confirmed speakers and their talks are:

To help make the keynotes and the MySQL community events accessible to the greatest number of community members, we are once again offering $5 Expo-Only passes for the Percona Live MySQL Conference 2014. An Expo-Only pass provides access to the keynote addresses, Lightning Talks, Birds of a Feather sessions, the exhibit floor, and the Community Networking Reception on Thursday night. The first 100 people who register for an Expo-Only pass (new registrations only) using the discount code “KEY” will be able to register for just $5.

We are now accepting applications for the DotOrg Pavilion at the Percona Live MySQL Conference 2014. The Pavilion is a free expo hall space for non-commercial projects relevant to the MySQL community. Previous participants have included projects like common_schema, MariaDB, Mroonga, openark-kit, OpenStack, phpMyAdmin, Shar-Query and Tarantool. Applications must be submitted by February 28, 2014.

We are once again supporting the MySQL Community Awards by providing a platform for the winner’s to be announced at the conference. Nominations are now open for the 2014 MySQL Community Awards which are organized this year by co-secretaries Shlomi Noach and Mark Callaghan. Winners will be announced on Thursday, April 3, during the Community Reception at the Percona Live MySQL Conference and Expo. The deadline to submit nominations is February 23.

Visit the Percona Live MySQL Conference and Expo 2014 website for more information about the conference and to register.

The Percona Live MySQL Conference 2014 promises to be the best yet. I look forward to seeing you there!

I joined Percona as Chief Marketing Officer in 2011. I've been marketing high tech software and services worldwide for over 20 years including open source solutions since 1999. Prior to Percona, I was the first marketing person for DotNetNuke, the leading open source web content management system for .NET. While at Percona (#1566 in 2013 and #2187 in 2014), DotNetNuke (#228 in 2010), and CaseCentral (#450 in 2004), each company was named to the Inc. 500/5000. You can check out my thoughts on marketing open source solutions on my blog at www.opensourcesoftware.marketing.