Good news everyone! I recently presented a webinar: Percona Server 5.6: Enterprise Grade MySQL. It was also recorded so you can watch along or view the slide deck. As with all my talks, I am not simply reading the slides so it really is worth to listen to the audio rather than just glance through the slide deck.

There were a number of great questions asked which I’ll answer below:

Q: How does Stewart feel about this version of 5.6 taking into consideration “Stewart’s .20 rule?” (ref 2013 Percona Live Conference).

A: For those who aren’t familiar with it, I have a rule which I call “Stewart’s dot twenty rule” which I’ve posted a few times about on my personal blog. It states: “a piece of software is never really mature until a dot twenty release.” I would say that MySQL 5.6 (and Percona Server 5.6) are both in really good states currently.

I strongly recommend the excellent series of “Fun With Bugs” posts by Valeriy Kravchuk. The latest Fun With Bugs post is: Fun with Bugs #20 – welcome MySQL 5.6.13! and certainly worth a read. I’m rather safe in saying that the first GA release of MySQL 5.6 was by far the best first GA release of any MySQL version ever and subsequent MySQL 5.6 releases have improved upon that. It is quite likely that 5.6 will work perfectly for you today.

If you are really conservative with software upgrades and want as few surprises as possible, then you can of course wait – but I’d certainly recommend kicking the tyres of 5.6 over the next few months and starting to plan a migration.

Q: Any estimate on availability of XtraDB Cluster using 5.6? 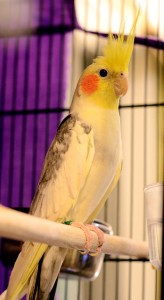 A: (Background: at one point during the Webinar you could hear one of our pet birds start to burst into song). I’m glad you asked as it gives me an excellent opportunity to include gratuitous photos of our birds! They’re both Cockatiels. People will often think cockatoo (specifically the Sulphur-Crested Cockatoo)and not cockatiel. A cockatoo is any of the 21 species belonging to the bird family Cacatuidae and the cockatiel is the smallest of the 21 species. 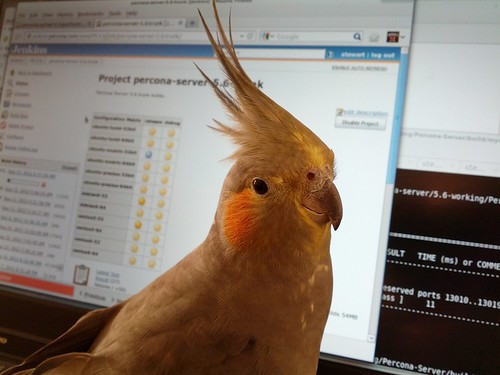 We have both a boy (Spike) and a girl (Beaker). Spike is the one who sings (while Beaker, like the muppet, goes meep) and could be heard for a moment during the webinar. Beaker has also been spotted helping with Percona Server 5.6 releases.

Q: The ‘first in Percona Server’ optimizations, did Oracle implement Percona code or write their own?

A: It would be accurate to say that there are changes in MySQL 5.6 that have been inspired by our work, and previously there has been Percona code that has made its way into MySQL (see COPYING.Percona in the MySQL bzr repository). For a multitude of reasons that aren’t worth going into here, it has historically been problematic getting code into MySQL if you didn’t work for the company that owned MySQL. This has been true of MySQL AB, Sun and Oracle and is certainly nothing new or unique to Oracle. What is different now is that things seem to be changing for the better and there is likely to be more cooperation with Oracle going forward.

Q: Has HandlerSocket been cooked into your 5.6 releases yet? Have there been any other improvements on that front?

Q: What Oracle 5.6 features have not yet been copied or reimplemented in Percona 5.6?

Q: Was innodb fake changes picked up by Oracle?

A: You can do the old replication trick

Q: Can Xtrabackup 5.6 be used on a system running Percona Server 5.5?

Q: question on replication: my database has no partitioned table, multi-thread replication (feature of 5.6) is not going to help. Am I right?

A: Currently the multi-threaded replication slave will partition work up across database schema. It doesn’t matter if your tables are partitioned or not, it matters what database (schema) they’re in. If all your tables are in the same schema, then parallel slave will not currently help.

Q: Is Percona Server 5.6 a drop in replacement for 5.5 or is there an upgrade process? If so, what is involved to roll back to 5.5 if necessary?

There is a section in the MySQL manual on downgrading from 5.6 to 5.5 and I don’t think there should be any extra limitations imposed by Percona Server on going from 5.6 back to 5.5. That being said, downgrading is certainly not as well tested as upgrading and I would consider it more of a last resort than something to jump to quickly.

A: Soon. The current Percona Server 5.6 releases are fairly solid and I can certainly recommend trialling them.

Q: Are there any known mysqllib binding issues or deprecations for 5.6?

A: Not currently. Generally, the recommended practice is to go through each major version (going through 5.5 before heading to 5.6). There is upgrade documentation for upgrading 5.1 to 5.5 and for 5.5 to 5.6 – and you can certainly run 5.5 for only a few minutes before upgrading to 5.6.

A: Yes! There is a Moving to MySQL 5.6 training course offered by Percona which covers both MySQL 5.6 and Percona Server 5.6.

Q: I didn’t notice any mention of the improved NUMA support in PS 5.5 (https://www.percona.com/doc/percona-server/5.5/performance/innodb_numa_support.html). Is this carried over to Oracle and/or Percona 5.6?

A: Yes it has made it into Percona Server 5.6. See https://www.percona.com/doc/percona-server/5.6/performance/innodb_numa_support.html for the 5.6 documentation on it. I am not aware of Oracle having implemented it though.

Q: Have you made tests of user_stats overhead compared to performance_schema in 5.6?

A: I’m not aware of any published benchmarks for 5.6 although it would be great to see some.

Q: Does this release support the live table changes?

A: For some types of changes, yes.

Q: Is “Warning: Using a password on the command line interface can be insecure.” error being filtered out in the Percona release?

A: No. It’s not a good idea to provide passwords on the command line.

A: As promised, I am right now going to pester people about writing various posts on migrating from 5.5 to 5.6.

Stewart Smith has a deep background in database internals including MySQL, MySQL Cluster, Drizzle, InnoDB and HailDB. he is also one of the founding core developers of the Drizzle database server. He served at Percona from 2011-2014. He is a former Percona employee.