Next week, a couple of us at Tokutek will be heading to Buenos Aires for the MySQL / MariaDB Conference & Expo LA. Gerry Narvaja actually grew up in Buenos Aires. My own family is Argentinian. I spent several years there as a child, and my childhood home in South Carolina was Argentinian in spirit: absolutely no English, and the only grits that entered my house were served with tomato sauce and called polenta!

As some of you get ready to visit Buenos Aires, maybe for the first time, I thought I’d share an abbreviated list of my favorite things to do.

First of all, make sure to watch the really fantastic con movie Nueve Reinas. Not only is it a great movie, but much of it takes place in the Hilton where the conference will be held. 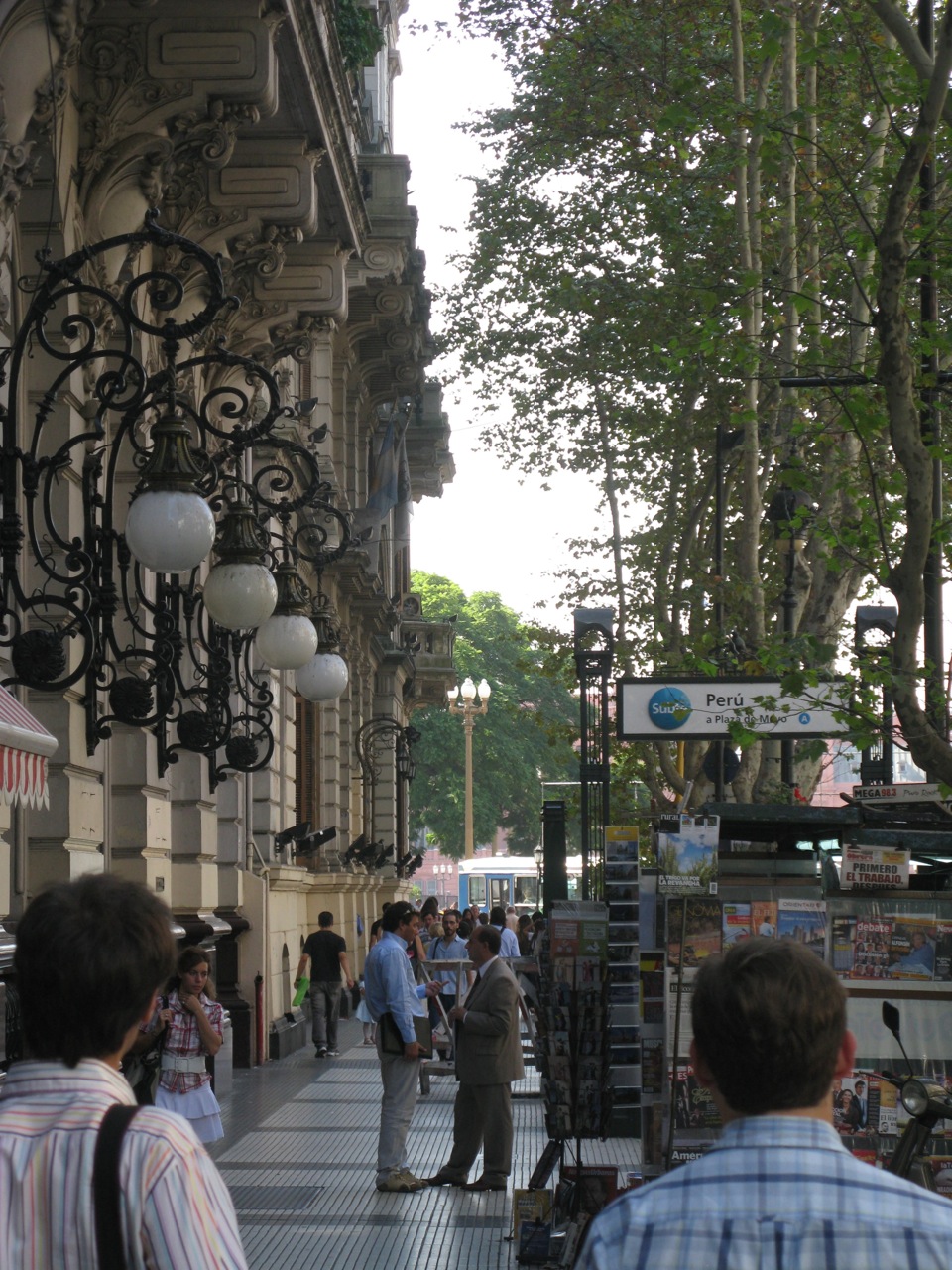 Walking down the Avenida de Mayo is a great way to see what Belle Epoque Buenos Aires looks like. It's French architecture, followed by Italian, then more French. Cafe Tortoni along the way may be touristy, but it's still worth a visit.

Buenos Aires, for all its size and splendor, is not a standard tourist city. It doesn’t have one of the worlds great museums, and it doesn’t have many of the traditional sights. It’s mostly a city to hang out in, to walk around in, to get the feeling of, rather than one with a big check list of “stuff to do.” One of the exceptions, and the one deserving to be listed first is Recoleta Cemetery. I’m dead serious. It’s a necropolis of above-ground crypts holding most of the former presidents of Argentina and the sons and daughters of the richest families. It’s a clash of architecture, all done up in miniature. Who needs Legoland when you have La Recoleta?

To really get a great overview of the city, check out the tour company Eternautas. All their tour guides have history or architecture degrees from the the highly-regarded Universidad de Buenos Aires, so their “City Neighborhoods” and “Architecture” tours go into as much (or little) depth as you want. They are a tried and true way to get to know Buenos Aires.

Buenos Aires is a great ice cream town. It’ll be cold, and the Porteños will be complaining about it, but they’ll also be eating ice cream. Every neighborhood claims to have the best, but if you don’t want to track down the little neighborhood gems, you can’t go wrong with one of the branches of Volta or Persicco. I’m a horrible New York snob, and I wish we had ice cream like that.

The Grand Dame of Buenos Aires hotels is the Alvear Palace. Even if you aren’t splurging for a stay there, it’s a great place to stop by for a martini in the evening, or even better yet, for high tea.

I have a taste for old Buenos Aires, so I love the Confiteria Ideal (Suipacha 384), where you can get pastries, and where they have a Hammond Organ. Someone desultorily bangs out dance tunes and octogenarians take to the dance floor, all surrounded by 1920s glitz. At the oposite end of the spectrum is Olsen, in the neighborhood formerly known as Palermo Viejo, and now irritatingly called Palermo Soho. (It’s right next to Villa Freud — a neighborhood so called because of the large number of therapists. Buenos Aires has the most psychotherapists per capita in the world!) Olsen is a too-cool-for-school restaurant with top-notch Argentine/Scandinavian fusion cuisine.

Ultimately, Buenos Aires is a town for flaneurism: the act of wandering around a city with no particular goal or destination. Puerto Madero, the area right around the convention hotel is probably the worst place in Buenos Aires to do this. It’s all planned and rigid and squeaky clean. Get out into the city and enjoy! (Just not during my talk or Gerry’s.) 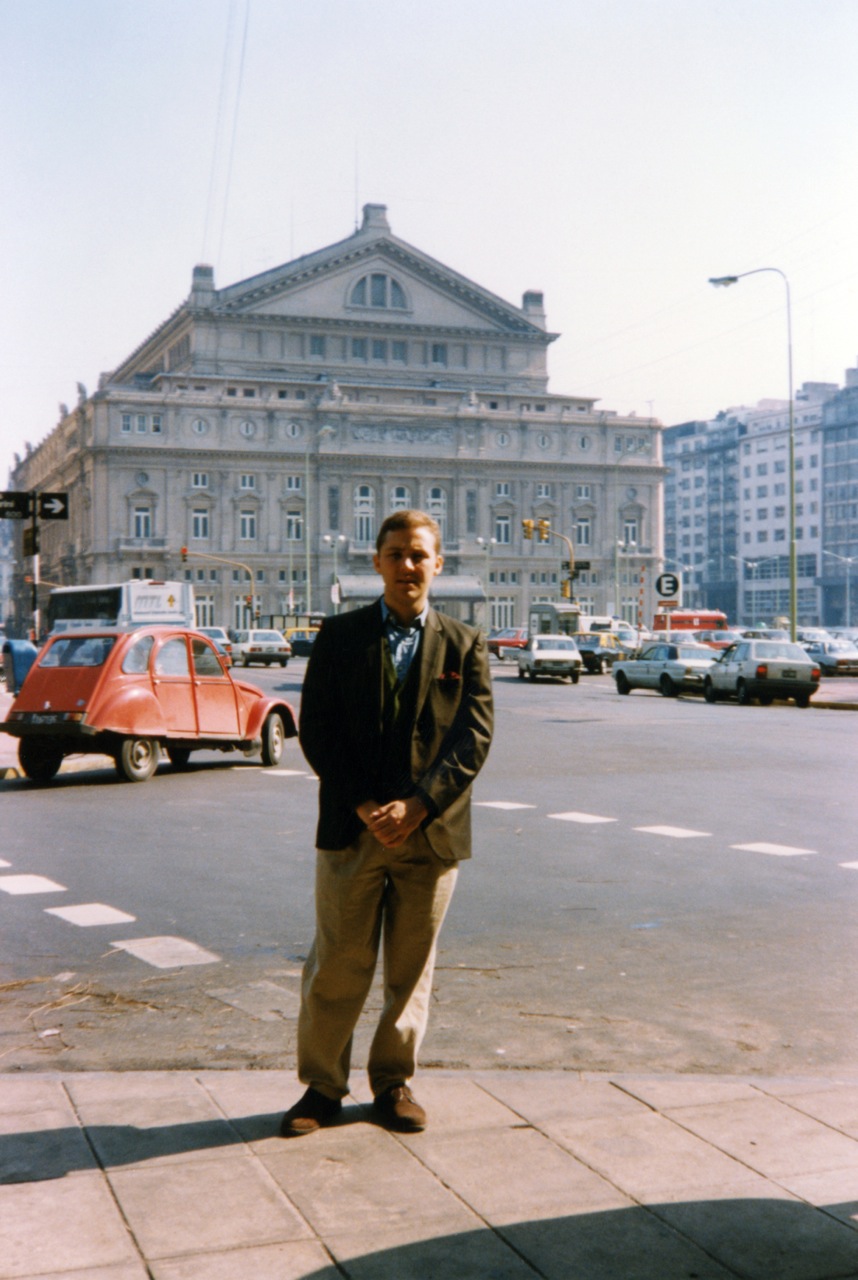 The Theatro Colon is a storied opera hall, with famous performances by the likes of Caruso and Callas. Nowadays, the tours show off what is still one of the most beautiful opera houses in the world. There I am in front, a long, long time ago.