This version offers performance enhancements over previous releases, especially for multi-client scale up and point queries, and extends the cases where ALTER TABLE is non-blocking, in particular adding Hot Column Rename.

In TokuDB v5.2, we have reworked our locking scheme to better support multi-client workloads, and as always, we have focused on large databases. How did we do? Let’s check out some benchmark numbers.

This is a SysBench comparison of InnoDB 1.1.8 and TokuDB v5.2. Prior to the run we started the database from a cold back-up (the cache is empty at the beginning of the 1 client thread run) and ran for 1 hour at each number of client threads. The following graph shows a significant performance improvement (10%-60%) at all measured levels of concurrency. The values shown are the average transactions per second for the final 15 minutes of the benchmark. 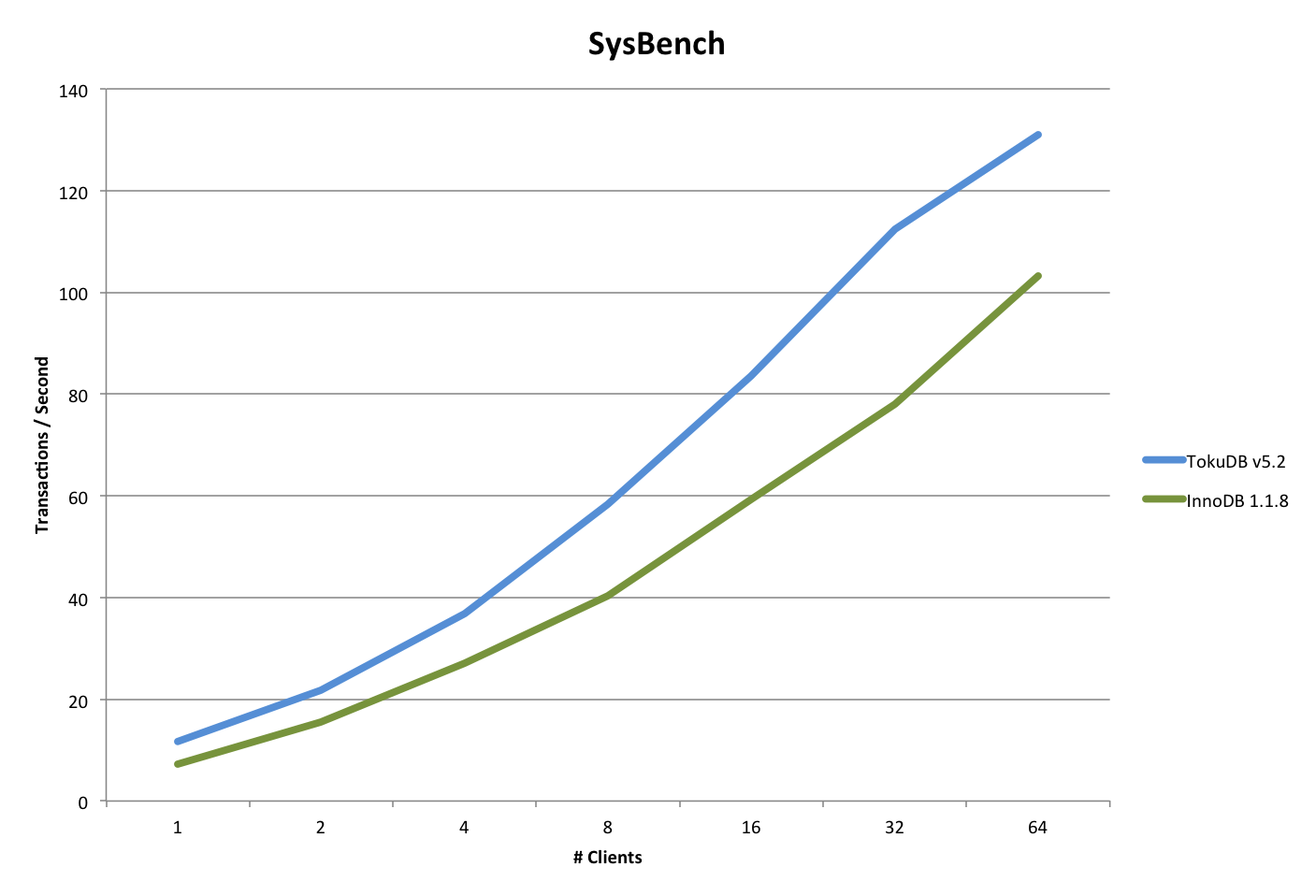 Additional details on the software settings for Sysbench can also be found in the Appendix at the end of this page.

This is a TPCC-like comparison of InnoDB and TokuDB v5.2 on a 5000 warehouse database. The horizontal axis is the number of clients, the vertical axis shows throughput (New Order Transactions/10 seconds). Our multi-client work brings us to parity with InnoDB for this test.

Both the Sysbench and the TPCC-like benchmarks have strong point-query components. Our improved performance over InnoDB, even with one client, shows that we are now outperforming InnoDB for point queries, at least in these tests. We’ll be blogging more specifically about point query performance so stay tuned. One way we achieve better point query performance is to have a different read-block size and write-block size. I’ll explain what that means in later blog posts, but one consequence is that read-intensive loads on RAIDed disks now perform many fewer I/Os.

In other news, we previously released Hot Indexing (HI) and Hot Column Addition and Deletion (HCAD). In both cases, the downtime of these Alter Table operations goes from hours to seconds.

In v5.2, we have added Hot Column Rename to the suite of online operations we support. You’ll be able to change the name of a column in a matter of seconds, just as you can now add or delete columns. We have also made Optimize Table hot, but it’s important to note that in TokuDB, Optimize Table only flushes background work, such as that produced by a column addition or deletion. It does not rebuild indexes, nor does it need to, because TokuDB indexes don’t fragment.

The difference is because InnoDB uses direct I/O whereas TokuDB reserves space for the OS cache.

TPCC
All TPCC-like benchmarks were run with the following command line:

Sysbench
All sysbench benchmarks were run with the following command line: