This run is very similar what I had on Intel SSD X25-M card, but now I use FusionIO 80GB SLC card. I chose this card as smallest available card (and therefore cheapest. On Dell.com you can see it for about $3K). There is also FusionIO IO-Xtreme 80GB card, which is however MLC based and it could be not best choice for FlashCache usage ( as there high write rate on FlashCache for both reading and writing to/from disks, so lifetime could be short).

Also Facebook team released WriteThrough module for FlashCache, which could be good trade-off if you want extra warranty for data consistency and your load is mostly read-bound, so I tested this mode also.

All setup is similar to previous post, so let me just post the results with FlashCache on FusionIO in 20% dirty page, 80% dirty pages and write-through modes. I used full 80GB for caching ( total size of data is about 100GB). 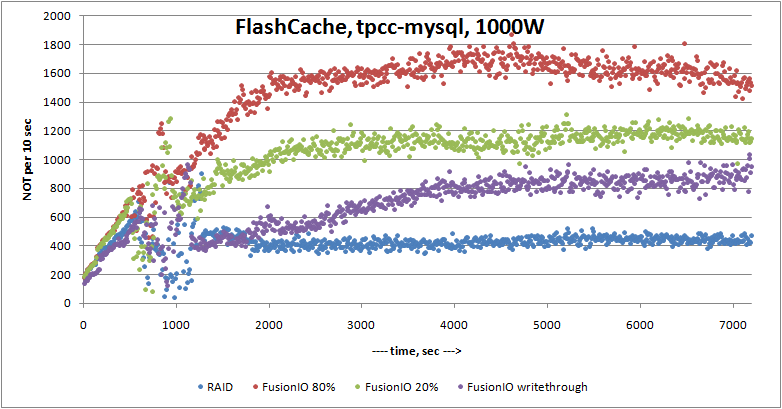 Conclusions from the graph:

On this post I finish my runs on FlashCache for now and I think it may be considered for real usage, at least you may evaluate how it works on your workloads.